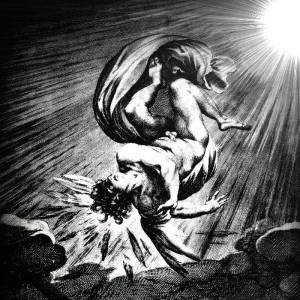 Lifestream are a French Black Metal band and this is their début album.

Lifestream play their Black Metal in a dark and atmospheric style that recalls the Norwegian scene at its height, and Emperor in particular.

Keyboards are used to add extra layers, but not overly so; they enhance the overall atmosphere of the songs without drawing needless attention to themselves.

The songs draw you in and enclose you in a shroud of darkness that you’re only too happy to be smothered by. This is an ambitious and atmospheric release from a promising new aspirant and Lifestream show that they have what it takes to play in the big leagues.

An album like this draws influence from the Norwegian style, as mentioned, but also contains enough quintessential elements of the French scene to be identifiable as such. Underground, occult and inscrutable; Lifestream have created an ambitious and impressive 53 minutes of supreme Black Metal art.