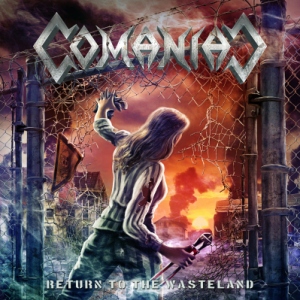 Comaniac are from Switzerland and play Thrash Metal. This is their début album.

Boasting a crisp, clear sound where you can feel every bit of crunch, Comaniac sound remarkably fresh considering this is Old-School Thrash Metal.

The songs have a kind of used vitality to them; it’s a well-worn genre but the band play it well and with such passion that it’s hard to feel jaded around them.

The riffs are frantic and well written, with plenty of leads and solos thrown around to make things sound even more Metal than they already are.

Comaniac certainly know their Thrash. These songs could easily have been written in the 80s, although the 80’s Thrash bands never had such a crisp, modern production as this of course.

The singer screams out his lyrics with a kind of focused insanity, one step away from mayhem but controlled enough for the moment. It’s quite charismatic and makes a good impression.

Considering the fact that I’ve been a bit sated on Old-School Thrash for a while now I wasn’t expecting much from this but Comaniac have firmly won me over. The combination of Thrash know-how and a punchy, energetic sound makes for a great listen.

Turn on, turn up and Thrash out.