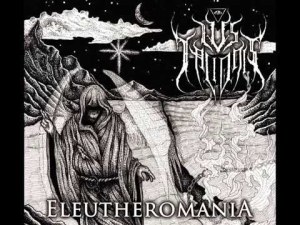 Ius Talionis are from Germany and this is their first release. They play Black Metal.

Although this is actually a demo release the quality of both sound and content belies this.

This is underground Black Metal with a raw-in-a-good-way sound that has a warmth and approachability to it despite the icy aura that the riffs themselves exude. The bass deserves special mention as not only is it audible but also adds tangible atmosphere and depth to the proceedings.

The songs lack ostentation and are atavistic beasts drawn from the dawn of Black Metal and harken back to the days when the likes of Burzum and Darkthrone were just dark amalgamations of potentiality and burgeoning threat.

This is Old-School Black Metal viewed and produced through the prism of history and hindsight. As such it perfectly captures the raw essence of Black Metal without ever falling into the trap of complacency, pointless hero-worship or any number of pitfalls that might befall the common Black Metal band.

These songs have a good deal of honesty about them and each one is truly enjoyable as an exemplar of the Blackened art of mood, pace and malevolent tribute.

Eleutheromania is a very impressive début release. With 4 songs in 36 minutes it could have easily passed as a début album. The fact that they haven’t done this and we still have this future début to come is a very exciting prospect indeed.

Ius Talionis are a band to watch that’s for sure. If they can keep the quality levels up then I predict a great album from them at some point.