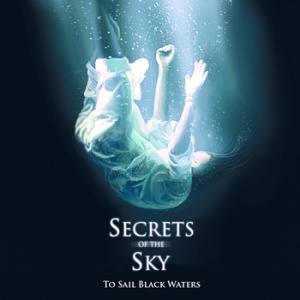 This is US band Secrets of the Sky’s début album.

Secrets of the Sky play interesting Progressive Doom/Post-Metal that has a good dollup of Post-Black Metal/Blackened Doom mixed in as well. So many sub-genre labels! As you’ve probably gathered they have a fair bit going on.

The band have a firm grasp of dynamics and of the heavy/light aspects of their sound, and although the songs are of a good length, they also raise the tempo when they need to.

A very sturdy production allows the instruments to sound very solid. Everything is played proficiently and the songwriting makes the most of this.

The music is a pleasing blend of the above, already diverse, sub-genres. Doom riffs, Post-Metal meanderings, Blackened melodics and sound-walls all contribute to the feel of a very colossal album. Extra instrumentation/effects enhance the tracks on occasion adding to an already rich palette.

Largely, the band are are both heavy and dark. Wisely, however, they juxtapose this against lighter, acoustic sections, more hopeful refrains and moments of brighter atmosphere amidst the murk.

Vocally the singer grunts and screams his way over the towering guitars and iron-cast drumming. It’s not until the second song Decline that clean vocals are used for the first time; these are expertly delivered and raise the bar extremely high.

This is a highly accomplished album, all the more impressive for being their first. Highly recommended; whatever secrets the sky holds is obviously serving them well. Seek this out and learn from them.