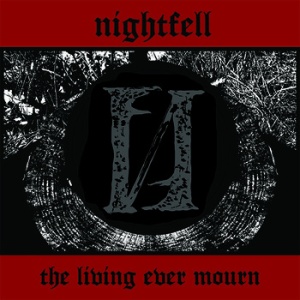 Nightfell are from the US and play Death/Doom Metal.

This is heavy, very heavy, and darkly melodic. The riffs collide and smash down, like Entombed playing a funeral dirge. A collision of Old-School Death Metal and Crusty, Sludge Doom; this is reminiscent of an older Metal landscape whilst concurrently sounding fresh and invigorating.

The music has a personality about it that recalls Old-School Death/Doom Metal from the likes of Dismember, Sentenced, Paradise Lost, Amon Amarth, My Dying Bride, etc. – bands with character that were leaders rather than followers.

The dual vocals rasp, growl and bark their way across each other and are as harsh and unforgiving as you would expect. Added to these are the odd spoken passage and semi-clean to keep things interesting. The vocals have their own personality and character and are very much in keeping with the rest of the music in this regard.

The Old-School Doom Metal riffs really pile up on each other and the feeling of having stepped back in time is strong. However, none of it comes across as nostalgic; rather Nightfell are merely treading the same ground as many of the greats from yesteryear and are looking to put this style of music back on the map once more.

The songs come with plenty of hooks; you’ll wonder how a song like Altars To Wrath isn’t a cover song, so authentically Swedish and catchy it is. Each song has been poured over with love and passion and a monster has been created.

The band make the most of their dark melodies to create a bleakly rich atmosphere dosed up on Doom and heavy on the Metal.

This is an album that demands to be heard.

2 thoughts on “Nightfell – The Living Ever Mourn (Review)”