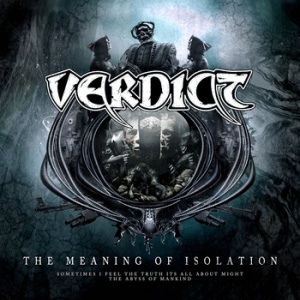 Verdict are a veteran German band who play Thrash Metal with some added Death Metal. The Meaning of Isolation is their fourth full-length release.

They have a crisp, professional sound that allows the Thrashy riffs to glitter and shine. The nine tracks are steeped in Germanic Thrash and are savage and immediate. Imagine Kreator given a Death Metal makeover then add in a few elements of New-School Thrash and you’ll have an idea of Verdict’s mode of attack.

Snarling vocals take the centre-stage and sound as if a caged, rabid dog has been given the microphone. These are backed up on occasion with deeper growls that reinforce the hostile nature of the band.

The drummer keeps up a good pace, but the band also know when to lock into a good groove. Killing Fantasies is a good example of this; the band has a good groovy bounce for the first minute or so before going into full-on Thrash mode for the next section.

This is a well-written Metal album that manages to capture the essence of what Thrash is about while bringing it up to date with some more modern, aggressive influences; all the time retaining authenticity and never coming across as commercial or sanitised.

One thought on “Verdict – The Meaning of Isolation (Review)”