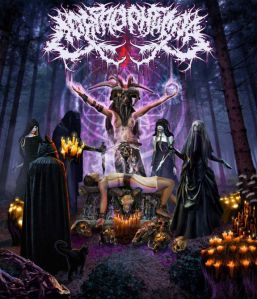 This is the second album from Canadian Death Metal band Corprophemia.

Playing savage Death Metal that has elements of the brutal and technical styles, this is a modern approach to the genre that injects a bit of Deathcore and slam into the mix to further increase the violence factor.

Canada seems to be very good when it comes to this kind of thing. Fellow Canadian Death Metallers such as Cryptopsy, Deformatory, Pronostic, Antlion and Unbreakable Hatred to name but a few have all released some top quality music in the not too distant past and we can now add Corprophemia to that list as well.

The singer has a fine set of lungs it seems, with his clipped barks reeking of aggression. His is a very satisfying voice and perfectly complements the precise and exacting nature of the music.

So what of the music? It’s well-played, well-written and well-recorded. This pretty much covers all of the bases and all that remains is for this to be played at full volume to annoy the neighbours.

The band use crushing rhythmic riffs well and mainly sound like a combination of the dynamics and technicality of Cryptopsy, the staccato brutality of Beneath the Massacre and the sheer violence and cold assault of Coprocephalic. Add some snippets of cut-short melody here and there and brief ambient synth interludes between tracks and you have a very compelling 30 minutes. 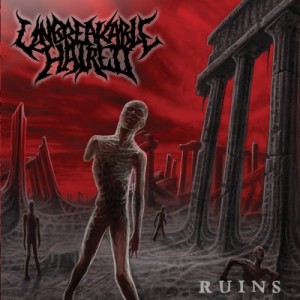 Unbreakable Hatred are a Death Metal band from Canada and this is their second album.

This is Technical Death Metal that’s as ferocious and brutal as the best of the genre while still having the technical flourishes that mean so much to fans of Tech Death’s dizzying heights. Even more impressive though is how Unbreakable Hatred have managed to retain a semblance of songs on these tracks so that they don’t disappear too far into their own world.

The band have a very clean and polished sound that allows the listener to hear everything that they do. As such, it’s easy to hear how proficient they are at their craft and it’s very easy to enjoy the carnage that they unleash.

The vocalist has a savage voice that’s crisp and neat, if such terms can be applied to aggressively barked growls. I find he manages to compress a lot of personality and feeling into these clipped outbursts and the band have a definite asset in his delivery.

While the songs are no doubt on the technical side of things, I also like the inclusion of simpler riffs and sections that help the songs to retain a catchier, more enjoyable edge.

Pounding drums, heavy riffs, frenzied vocals, lightning leads and solos…Unbreakable Hatred don’t mess around and they spend these short 30 minutes showing a finely balanced blend of professionalism and base aggression.

Listening to this it brings to mind Cryptopsy’s None So Vile; Ruins evokes similar feelings to that album and shares similarities to it in some ways. It’s not quite up to those lofty standards, of course, as None So Vile is pretty much The Ultimate Death Metal Album™, but it’s damn good company to keep at any rate.

This is definitely one of the elite. I think we can safely move Unbreakable Hatred to the top of the recent Technical Death Metal pile. All hail our new overlords!