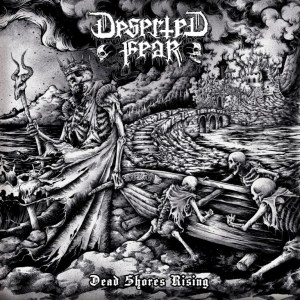 This is the third album from German death metal band Deserted Fear.

I thoroughly enjoyed their second album Kingdom of Worms; it was a really solid album of death metal by a band that remembered the importance of actual songs.

This is the second album from German Death Metallers Deserted Fear.

Deserted Fear sound absolutely huge. Their sound is crisp, punchy and as solid as a slab of granite. They play a blend of Classic and Modern Death Metal which sees them taking the best from the old and new to create songs that are brutal but not just for the sake of it.

Here we have a band who remember the importance of actual songs. Remember those? The tracks on this album are full of hooks, catchy melodies and memorable riffs.

The musicianship is first class and the band know how to translate good songwriting into results.

The riffs rumble along like a steamroller. The band combine aspects of Swedish Death Metal, Bolt Thrower, Vader and more modern influences to create their trademark sound.

The combination of chunky rhythm guitars and more melodic leads work well together and bring out the Swedish influence in their sound. A mid-paced assault shows their Bolt Thrower influence and the faster sections have more of a Vader edge to them. All of this is wrapped in a state-of-the-art production.

The vocalist knows his stuff and uses his voice to beat and batter the listener into submission before the crushing music deals the deathblow.

Kingdom of Worms is a solid album of destructive Death Metal that could happily sit in any Metal fan’s collection.

Try them out today.