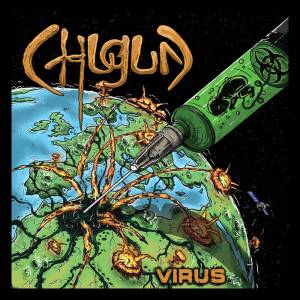 Chugun are a Thrash/Death Metal band from Israel. This is their début album.

Chugun’s sound combines Old-School Thrash Metal with some just-as-old Death Metal influences as well as a pinch of a more modern approach to produce this enjoyable 30 minutes of Metal mayhem.

The vocals alternate between deep grunts and higher screams. The singer does both styles very well and her voice is well-suited to both roles.

This album is an up-tempo rager, with the main bulk of the music having a healthy Thrash Metal base, onto which Death Metal and some Modern Metal elements are incorporated. There are a lot of good riffs on here and the bend seem to revel in what they do. It’s clear a lot of love and passion has gone into this release and this comes out in the songs.

My tolerance for Thrash Metal has lowered a lot of late, partially due to the over-saturation of the retro/comedy style; Virus, however, has none of this nonsense and this is a really enjoyable release. It’s more aggressive than most due to their Death Metal aspect and the songs motor along quite nicely.

The musicianship is tight and the recording loud and heavy. It’s a modern-sounding rendition of an older style, played with grit and devotion.

Unexpectedly good. Damn good, in fact. Check this out.