Blowsight’s new album Life & Death is a breath of fresh air for the more commercial side of hard music, and as I said in the review of the album it makes me realise that perhaps all is not lost for for this brand of Rock. Let’s catch up with the band’s singer/guitarist Nick Red to see what he has to say…

For those that are unfamiliar with your band, introduce yourself!

We’re a four piece Stockholm based rock band, formed back in 2003. We’ve been touring all over the world, mainly Europe but some shows in the states have also been done. Done a handful of albums and had a good time along the way, to put it simply…!

How did the band form?

Me and [guitarist] Seb started jamming on our favourite songs from our favourite bands, Machine Head, Pantera, Metallica, Sepultura, that stuff, in a smokey basement in Stockholm. I had been writing songs for a couple of years, he heard them and liked them. So we teamed up with [drummer] Fabz and [ex member] Flavia Canel and started rocking the Swedish underground scene. Nowadays we’re boosted by the bass lines of Mao, who joined the band a couple of years ago.

It depends. My rock influences are Metallica, and in particular James Hetfield. The reason why I picked up a guitar in the first place. Amazing stage appearance, amazing rhythm guitarist… that dude is a machine. A soul filled machine. I picked up the guitar and jammed along to their latest album “Death Magnetic” the other day, and there’s some quite challenging stuff going on there that I didn’t think of while just listening to the tracks. So definitely Metallica. Apart from that, I have to mention Refused, Sikth and Machine Head in the metal area.

At home, I rarely listen to a lot of metal music. Sure, I’ll pop some Slayer albums every once in a while, but I preferably spin a lot of Björk, Radiohead, Sofia Somajo, Frou Frou, more electronic and no-guitars-to-be-found kind of music. But to recommend? Mao played me this band called I See Stars, in the car the other day, and that was pretty damn brutal. Heavy stuff. I’d recommend them, check ’em out. Also, Fit For A King kicks some major ass. I would love to mention We Butter The Bread With Butter, but I haven’t heard enough. Fuckin’ love the name though! *laughs* Also, this Swedish band called Durango Riot rocks my shirt off, very energetic and fiery stuff, and contains one of the wittiest, nicest singers I have ever met.

What did you want to achieve with your album?

Achieve? To produce some good, high quality music. Music with passion, music that speaks to you. Previous albums, I’ve been showing my darker, angrier side, but I’ve become more mature and on the latest album came to realize that it feels better to sing about hope, joy, you know. Focus on the good things in life. That’s why I love the band Hatebreed, their lyrics are very “think for/believe in yourself”, and I endorse that. I think the next album, planned to be released this fall, will show a lot more of that. Those themes inspire me.

How did you come up with the songs on your album?

I write about 95% of the music, in our Studio “Shed Evil” here in Stockholm. I record almost every day. Not always Blowsight material, but for other artists or just to keep the creative muscle busy. When my band brothers come by, I play the stuff for them and they add their own flavour to the songs, pitch in ideas and “maybe try this?” or “I hear this instrument in the background”, whatever. The main idea for Blowsight that we had since day one, is to record whatever we wanna play live. Doesn’t matter if it’s punky, metal sounding, poppy, electronic. A lot of genres fit under the Blowsight umbrella. Hell, on the new album I even convinced them to go a tad country!

We actually just refreshed the demo versions I recorded. Added [drummer] Fabz drums, recorded the guitars and bass lines over and threw in more dubs, more synths etcetera. That’s the benefit of having your own studio – you can go in and add, change, twist, rearrange whenever you feel like it. I produce and mix every project. I guess you can call me a control freak. I know what I like.

Are you pleased with the end result? Would you do anything differently next time?

There’s always, ALWAYS things you want to change. Every musician feels that. I’m my own most evil critic, hands down. I’m the one thinking “damn, I should’ve tried this scale on that solo”, or “maybe if I would have sung it THIS way”. But that’s what keeps me ticking as an artist. Imagine recording the “perfect” album. That would be horrible. Where would you go from there? *laughs*. But I am very, very pleased with the result.

We’re releasing this song called “Winter Show Mercy” at the end of February, dedicated to the homeless people having an extra hard time during the winter season. It will be a charity song. I recorded it and got help from my brother Kristofer laying the bass tracks, due to Mao being out of town. He’s an amazing bass player, so I know he’d do the job done. And Seb’s ears are surreal, so I put him on the task to master the tune. Turned out great.

We’re gonna go play some Swedish shows this spring, and then we’ll try to head over to the US in the summer. More info about that will be posted on our Facebook page, as soon as we got… that…. info *laughs*. I also have this EP that I recorded for a person I loved about five years ago called “The Eli EP” that might, MIGHT be released. We’ll see. Stay tuned! 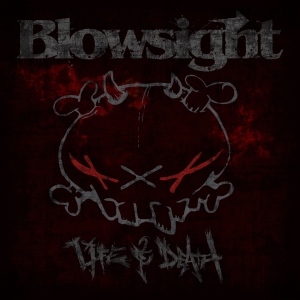 Blowsight are a Swedish Rock band, and this is their latest album. It’s nowhere near as heavy as most of the stuff I cover, but it’s good to have some variety in your Metal diet.

This has the requisite Rocky swagger and attitude, and the songs bleed confidence and self-assuredness. The band are right to have confidence in their abilities though as this is a veritable feast of chorus-heavy Rock songs with a shiny Metallic sheen underpinning everything.

The band play their instruments proficiently and ably enough to show what they can do with a good riff. Sometimes they remind of 80’s party/hair Metal bands only sans “irony” and with a hyper-modern sound, (Play Play Play), other times they’re more like Avenged Sevenfold in their approach, (It’s Me You’re Looking For), and other times they enter power-ballad territory, (Through These Eyes).

The singer has a great voice, full of power and attitude. His chorus lines are huge but not in a sugary commercial way, rather they have a more refined post-grunge feeling, which goes for the music as well. It’s more Audrey Horne than the majority of the radio-botherers, although almost all of these songs has the potential to be a radio-friendly unit-shifter; they even have a song called Hit on the Radio, which admittedly is a little more saccharine than the other tracks here.

A surprising album with a lot to give; varied modern melodic Rock that makes me realise that perhaps all is not lost for the more commercial sounding side of hard music. With the right exposure these could be huge.