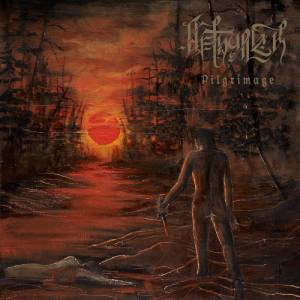 This is the fourth album from Finnish black metallers Aethyrick.

Another year, another Aethyrick album. Which is no bad thing, in my opinion, as so far the band have managed to keep the quality levels high enough to warrant such an output. Following on from last year’s enjoyable Apotheosis, (which itself followed 2020’s Gnosis and 2018’s Praxis), Pilgrimage contains 42 minutes of new material and sees Aethyrick continue their positive trend, albeit with some course corrections this time.

On Pilgrimage Aethyrick’s core sound is intact and well, but is now formed even more around the traditional blackened second wave style. There’s a greater focus on mid-pace groove and the music is pared back and simpler. Speed and fury are still part of the music, but much less prominently so. The strongly atmospheric aspects of Apotheosis have been reduced, further emphasising the music’s more primitive approach. This is not to say that these aspects are entirely absent, however, as melodic grandeur and immersive atmosphere can still be found on Pilgrimage, they’re just presented in a different way.

Pilgrimage is aptly named, as it represents Aethyrick returning to their second wave black metal roots to explore the source of the sound they have developed over the last few years. They have successfully melded this with their own character that they have forged over the preceding albums to produce an enjoyable collection of blackened hymns.