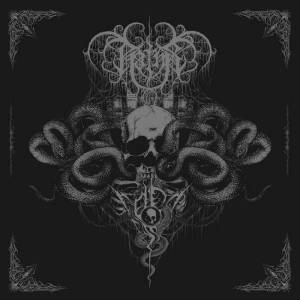 This is a split between two blackened doom bands – Nathr, who are from Norway, and Ordo Cultum Serpentis, who are from Mexico/South Korea.

Nathr open the split with the 19-minute track The Burial.

This is a slow-building piece that starts with creepy atmospherics and funeral mood. Even the spoken word that eventually appears can’t ruin the atmosphere that the band skilfully craft. Drums and guitars gradually seep into the music, adding further layers to Nathr’s hypnotic soundscape. At the halfway mark there’s a lull, allowing the potent built up energies to gather, before the crushing storm of blackened doom blows in. The slow dirge is imbued with grief and horror, and the song spends itself collapsing ever inward until nothing remains. The Burial is funeral doom by way of the blackened underworld, and Nathr channel this very well.

After that nightmarish experience, (in a good way), we have the Ordo Cultum Serpentis side of the spilt, which consists of the 17-minute Filii Serpentis Nigri.

This song begins with an ambient, ritualistic feel, and slowly morphs into a hideous form of doom-laden underground monstrosity. Like a mix of atavistic drone and sludgy doom, the music is weighty, grim, and surprisingly easy to fall into a trance to. As the music progresses it undergoes subtle mutations, one part at a time. The percussion grows heavier and more foreboding, while the anguished growls become ever more terrifying. This song too has a halfway lull, only a much longer one, the other side of which we get exposed to the first real burst of feral black metal on this release. The song then gradually winds down before disappearing into the oblivion from whence it came.

Shadows Crawl is a great introduction to the sound of the blackened doom underground. Both bands ably show what they’re capable of, and this 36 minutes is definitely worth checking out if your tastes run to this sort of grim darkness.