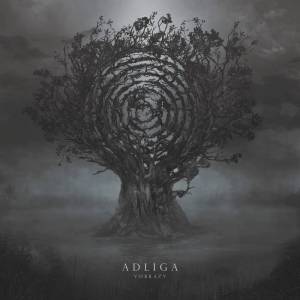 Adliga are a post-metal/doom band from Belarus and this is their debut album.

Adliga play a doom-laden brand of post-metal, and on Vobrazy they deliver 41 minutes of captivating material. Their music reminds me of a mix of Obscure Sphinx, Katatonia, Madder Mortem, The Ocean, and Cult of Luna, although these are only rough reference points.

The music is emotive and atmospheric, with a warm, organic feel. It’s a textured collection of tracks, and each one has its own personality within the album’s whole. There is a lot of detail in the songs, and they have been well-constructed to maximise atmosphere and emotion. The band’s melodies shine with dark resplendence as the rest of the music builds captivating soundscapes around them and the singer delivers her potent vocals. Bleak and melancholic, but in a modern post-metal way, these songs are crafted purely to conjure expansive soundscapes for the listener to immerse themselves in.

The songs explore a range of feelings, moods, and atmospheres. Adliga have a lot of tools in their toolbox, and are just as comfortable playing soft and beautiful, as they are harsh and heavy. Obviously, these two extremes aren’t the only styles the band are capable of, and neither are they mutually exclusive.

The main vocalist uses a mix of rich clean singing and harsh, raw screams; she mainly sings cleanly, but not always. Her voice has a powerful presence in the music, and her performance is compelling and diverse. One of the guitarists provides additional backing vocals too, and these add a rough, ragged, growled approach into the mix. A guest singer also appears on Naščadkam, providing clean vocals that are well-performed and complementary.

Vobrazy is an accomplished and very enjoyable record. Crafted from sturdy foundations and built upon by craftspeople of the highest calibre, Adliga’s music has impressed. Make sure that you spend some time with Vobrazy.