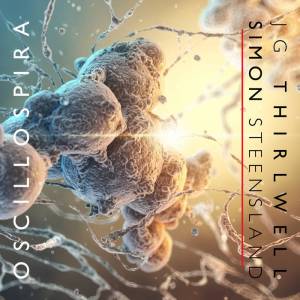 This is a collaborative work between US-based composer/producer/artist JG Thirlwell and Swedish multi-instrumentalist and composer Simon Steensland.

This album contains 73 minutes of layered and involved material. This is the sort of release that you could easily get away with describing as experimental, except that this rather nebulous term doesn’t really tell you anything about what it actually sounds like. The reality is that Oscillospira is quite hard to describe really, so loosely I suppose it’s like some sort of progressive, jazzy, orchestral, post-rock extravaganza. That’s okay, I suppose, but still no substitute for listening to the album and deciding yourself what it sounds like. However you choose to describe this, it’s undeniably cinematic in form and scope, and could easily be a soundtrack to…something. Whatever this fictional film or performance might be it had better be a worthy creation, as the music certainly is.

Constructed from a range of instruments, sounds, noises, and influences, the controlling minds behind this project clearly don’t lack in creativity or ideas. The eight musical pieces on Oscillospira are impactful and highly expressive, crafting immersive soundscapes that are as compelling as they are absorbing. Guest musicians flesh out the creators’ vision with instruments such as oboe, clarinet, violin, vocals, and, notably, some rather impressive drumming. Crikey, can this guy play.

Overall Oscillospira is an impressive and very individual piece of work. Enjoyable and emotive, as well as fascinating and rich in musical rewards, this is an album to discover something new in with every listen. Exploring these cinematic creations is a joy, and a multifaceted journey that any fan of well-realised individualistic music should embark on.