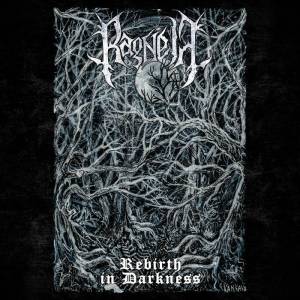 This is the second album from Ragnell, a black/death metal band from Mexico.

This is an enjoyable mix of black and death metal, with the ratio skewed towards to the black side a bit more than the death one.

Both parent styles contribute to the band’s sound in different ways. Death metal gives the band their dark growls and sometimes muscular presence, while black metal provides blackened melodies and rhythms, serrated screams, and the occasional keyboard highlight. In simplistic terms, if you think of Rebirth in Darkness as a black metal album with both melody and atmosphere, and then throw in some growls and a death metal influence in some of the writing, then you’ll have an idea of what Ragnell have to offer on this release.

The band’s music covers a range of bases within the above framework. Brutal destruction shares space with melodic darkness, both of which you’d expect on a release like this. Less expected, however, are the moments of grim atmosphere and epic majesty that appear here and there; Ragnell take the time to explore some lesser-travelled paths on occasion. This could be a calmer moment of melancholic reflection existing amidst the majority of the malignant violence, or maybe an old-school background chant to ramp up the creepiness factor. These elements are used sparingly, so when they do get deployed by the band they work well.

The songs are well-written and do their jobs nicely. There’s even the odd hook or catchy chorus that worms its way out of the blackened formula that they employ; Broken to Faith is a good example of these aspects, but it’s certainly not the only one.

A very well-rounded and satisfying listening experience, Rebirth in Darkness is an underground gem of an album.