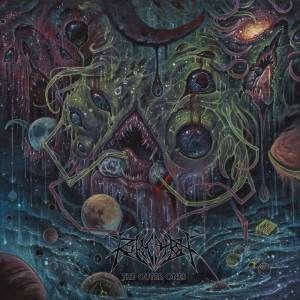 This is the seventh album from Revocation, a US death metal band.

Following up 2016’s enjoyable Great Is Our Sin, this is Revocation’s darkest and most aggressive work so far. Over their existence the band have managed to balance their death and thrash metal influences in an effective ratio, with neither one gaining ascendancy for too long in any particular place. On The Outer Ones, however, the death metal elements of Revocation’s sound have been beefed up and amplified. Revocation clearly mean business here.

Thrash is still part of the band’s sound, of course, but to a lesser extent than in the past. As stated earlier, the band focus on the death metal side of their influences to a greater extent. This is not done in a brutal, mindless way though. Rather, this manifests in Revocation’s music via the technical and progressive avenues.

Pushing themselves in a more technical and progressive death metal direction might have potentially sacrificed some of the song-based direct nature of the band’s sound, but this hasn’t happened on The Outer Ones. The more exploratory aspects of the songs have been reined in by a sense of focus, and the songwriting places the needs of the song first for the bulk of the time. Nor does any of this dilute the band’s brutality and heaviness. If anything, this is harsher than ever, and Revocation have presented here some of the most abrasive music of their discography.

This is clearly music that has been greatly thought about and analysed, with every part of the compositions placed under scrutiny for any sign of weakness. These quality control levels have paid off, and The Outer Ones contains an extremely satisfying, effective, and highly enjoyable collection of tracks.

Lasting 48 minutes and covering a wide range of ground, this album is a significant achievement and bodes very well for the future of a band that I already held in high regard prior to hearing this. Maybe it’s my inherent love of extremity, but The Outer Ones is the best Revocation album that I’ve heard to date.

4 thoughts on “Revocation – The Outer Ones (Review)”