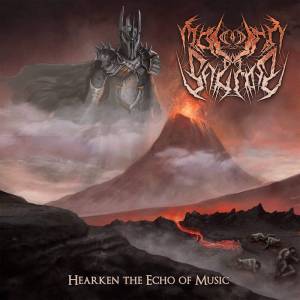 This is the debut album from US death metallers Mouth of Sauron.

Hearken the Echo of Music contains 39 minutes of music, and exists at the nexus of where brutal, technical, and progressive death metal collide.

The songs on this album combine brutality, technicality, and progressive elements into largely short songs that rip your face off in many different ways. There’s a core of ultra-violence and sheer brutality that can be felt in almost everything the band do, but this is not always straightforward violence. The technicality can be dizzying, although this is juxtaposed against some of the more direct riffs and slam-style beatdowns that appear mingled in with the general carnage.

The progressive edge of the music rears its head here and there to provide extra depth and even atmosphere to the aggressive music, adding an extra layer to the band’s belligerent delivery. Symphonic/keyboard parts are included too. Sometimes this is as part of an intro, or an interlude, while at others they’re included in the main parts of the songs.

There’s no overall defining style to this album, apart from conforming to the code of brutality, of course. A song like Balrog is a great example, as it’s essentially a 2-minute instrumental djent song. The fact that Mouth of Sauron can throw these types of things into the mix and still have everything appear coherent and natural is a testament to their ability.

Probably the band’s most well-rounded and all-encompassing moment comes in the form of the 10-minute brutal epic Nazgul Breath. Ambitious and skilfully delivered, the song is like a microcosm of the album as a whole.

Hearken the Echo of Music is very impressive. With a diverse and wide-ranging approach to brutality this is an album with a lot to say, and manages this feat without compromising on its sheer violence.