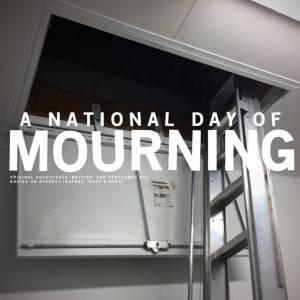 Bodies on Everest are from the UK and this is their second album. They play noise/sludge/doom/drone.

Noise/sludge/doom/drone you say? Yep, with A National Day of Mourning Bodies on Everest combine these elements into an ugly monster of an album. Across 66 minutes of disturbed, warped material, the band bring their twisted nighmarescapes to terrifying life.

The fact that the band favour a guitar-less dual bass approach should let you know this is HEAVY. Sickeningly so, at least when the distortion appears. It’s not all about the heaviness, however. In fact, a sizeable chunk of the material here deals with atmosphere of the grimmest and foulest sort. The distorted parts are very heavy though, as I say. Added to by pounding drums and punishing electronics, the lengthy songs on this album are unrelenting in their harshness and condemnation of anything nice or positive. This is not music that’s easy listening, at least not for most people.

The tracks on this album may ultimately be minimalist examples of dark electronically-enhanced drone, but they still use their spaces well to create crushingly atmospheric and abrasive music. They spread into the spaces they make by sheer force of belligerent will. They build and develop, twist and turn, using sound as a weapon with bladed intent; these knives are sharp, despite their rusted appearance.

Bodies on Everest revel in repetition, and it’s a credit to their skill as accomplished noisemongers that their material holds attention with a malignant focus and fascination while undertaking its grisly work. This is not an album to casually slip on. No, this is something dark and malevolent to become engrossed by during the night when you can’t sleep, and all thoughts turn to mortality and ruin.

Don’t mistake this for conventional music; it’s an ordeal, an experience. Hardened connoisseurs of extremity will find many rewards here, but it’s not for everyone. I recommend this, regardless, as Bodies on Everest have constructed a mutated soundscape of grim wonder.