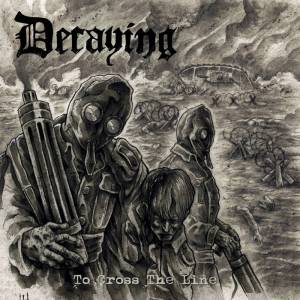 This is the fourth album from Finnish death metal band Decaying.

Following on from 2014’s One to Conquer, Decaying continue their eternal warfare on this newest release with a further 39 minutes of battle hymns.

This is old-school war metal, and fans of Asphyx and Bolt Thrower had better take cover as a new heavyweight tank has just entered the fray.

Decaying mobilise their forces around a core of song-based death metal, with catchy riffs and memorable vocals. Heavy guitars and deep growls accompany infantry as they march to glorious victory, while leads and solos arm them with their chosen weapons of war.

To Cross the Line is a solid and easily enjoyable album of death metal, one that is ready to destroy and break the enemy.

One thought on “Decaying – To Cross the Line (Review)”