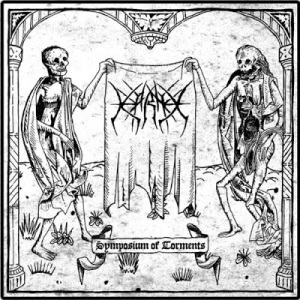 This is the second album from French black metallers Karne.

2014’s Faith in Flesh saw Karne nail their colours to the mast with their brand of high-speed black metal that had melodic bite and grim determination.

I enjoy Karne’s brand of serrated, melodic black metal, and on Symposium of Torments the band sound better than ever. Grim, rusty riffs and fiery melodic leads herald their return, and the songs on this 47 minute collection of blackened hymns to darkness show a band that are pretty much at the peak of their powers.

Karne have had some lineup changes since Faith in Flesh came out, but it doesn’t seem to have held them back. In fact the opposite seems to be the case, and this latest offering sees the band ascending to new blackened heights of raw, aggressive soundscapes.

The album is quite moreish and it’s very easy to slip on again once you’ve finished listening to it. The album blurs by in a twisted mass of teeth and blades, confident in its delivery and satisfied that it’s the most dangerous predator in its current stalking grounds.

Think a mix of Darkthrone’s old-school stylings, added to with some Swedish melodic influences from the likes of Marduk, and then inject a bit of a modern flavour into things here and there. The results are impressive, and the listener would do well to give this many an early spin to get to know it quickly, before then savouring its venomous delights over time.

Symposium of Torments is Karne’s best work so far, and it’s one that I’ll be returning to again and again.

One thought on “Karne – Symposium of Torments (Review)”