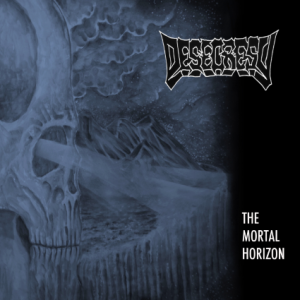 This is the fifth album from Desecresy, a death metal band from Finland.

Both Chasmic Transcendence and Stoic Death made very positive impressions on me, with the band’s heavy, old-school approach ticking all of the right boxes.

In many ways The Mortal Horizon sounds more atavistic and old-school than ever, with the rumbling, heavy production sounding ancient and cavernous. Whether this fits your taste or not depends, of course, but it certainly helps to provide the music on The Mortal Horizon with a greater sense of grim, macabre atmosphere than ever before.

This sense of atmosphere is enhanced by the band’s use of melody, which seems to sit atop the rest of the music like something separate, as if it’s unwilling to touch the dirt and grime-covered nature of everything else here. A healthy helping of doom influences also secure the atmospheric feeling of a lot of the material.

I’ve commented before on the inhuman-sounding qualities of the singer’s voice, and these are even more apparent on this latest release. He sounds monstrous.

So, Desecresy have travelled even further back in time to bring us their latest release. In some ways it shouldn’t work, but it surprisingly does. The band’s primitive stomp is quite appealing, and the equally primitive production values somehow enhance the band’s atmospheric qualities rather than smothering them. It’s quite an achievement, really.

Give The Mortal Horizon a listen and see if Desecresy can lure you into the dark caves that they inhabit. Just be warned – you might not get out.