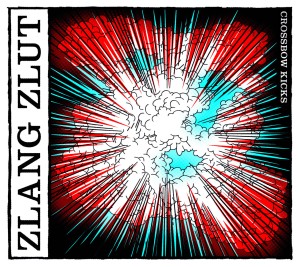 Zlang Zlut are a Swiss Rock band. This is their second album.

So here we have something a little bit different for you. Zlang Zlut are a two-piece featuring a drummer/singer and an electric cello player. Unexpectedly, this isn’t some strange left-field experimental release, but a full-on hard-rocking bunch of songs for fans of AC/DC and the like.

The singer has a lot of charisma and injects the full force of his personality into these tracks. He comes across as one of those people born to sing in a Rock band, and this very much comes out in the music.

The songs are simple Rockers that are upbeat and instantly enjoyable. The cello is similar enough to a guitar to make the transition to Zlang Zlut’s music easy, but different enough to give the band their own sound. Some of the cello solos even give the songs a Country-twang, which is not entirely a bad thing, believe it or not!

This isn’t novelty music though, far from it; these are well-written songs that are chock-full of hooks and catchy melodies. Zlang Zlut clearly know how to write a good tune.

This is feel-good music and listening to this album does exactly that – it makes me feel good. The cello shows itself to be a very versatile and nuanced instrument, adding something special to these songs.

Very enjoyable and very recommended. Check this out.