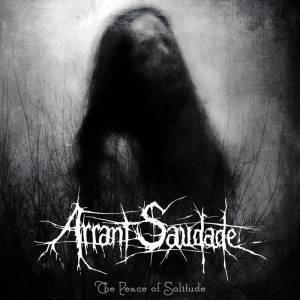 Arrant Saudade are a Funeral Doom band from the UK. This is their début album.

Featuring members of Aphonic Threnody and Abysmal Growls of Despair, you know there’s already a wealth of Doom experience and knowledge behind this release before you even hit play.

And when you do hit play, it starts off gently with piano, and then slowly awakens a the sleeping spirit of despair.

Slow, drawn-out and dripping with lost hope, these 5 songs take 44 minutes out of your life only to replace them with a very real and visceral sense of woe and misery.

Monstrous vocals are deep and unrelenting, growling their way through the solitude of the music like brutal and unwelcome guests.

So far, so Funeral Doom. But then Arrant Saudade do the unexpected and introduce clean vocals, and suddenly everything changes. Sometimes ethereal and sometimes sombre, these choir-like vocals are expertly performed and perfectly judged. When the angelic cleans soar above the beautiful music and seem to join with the resplendent melodies to create something greater than the sum of its Funeral Doom parts…it makes quite an impact I can tell you. Post-Funeral Doom? Sure, why not.

At any rate, the heavenly cleans and the dreamy, melancholic music seem to wash over you like liquid sound and it really is an uplifting and transcendent experience in many ways.

Okay, so not everything is perfect about this album – there are few which can lay claim to this grandiose title – but it’s hugely accomplished and, importantly, does something a bit different with the style. The core of the sub-genre is there with all of the hallmark traits, but The Peace of Solitude is far more emotive and atmospheric than most of its peers, gleaming with dazzling brightness and lustrous with magnificent despondency.

In some ways the growls are the weakest parts of these songs – it’s not that they’re badly done, (they’re not), it’s just that the rest of the music is so very well done that they have some catching up to do.

A relatively minor quibble though, in what is a very impressive slab of uplifting misery.

4 thoughts on “Arrant Saudade – The Peace of Solitude (Review)”