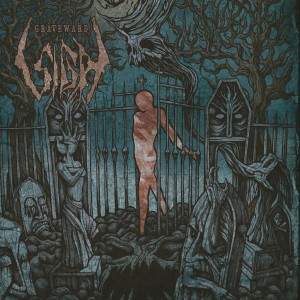 This is the tenth Sigh album. If you’ve never encountered them before, they’re from Japan and they play Black Metal. At least, that’s what they started out as and they’ve just kind of evolved from there. Avant-Garde Black Metal/Extreme Metal is probably closest to the mark these days, if you have to label it at all.

Sigh are one of the few bands in existence that come even close to being able to be called unique. They definitely have their own sound and identity, even if this has changed quite a bit through the years.

So on to Graveward. This is dense and complex music that features a lot of different parts to the songs. Clearly a lot of work has gone into these compositions.

The Black Metal base is present and correct, as well as the Avant-Garde tendencies. Add to this is a psychedelic influence, powerful cinematic qualities as well as a strong theatrical component and you have an album that’s born to stand out from the pack.

The theatrical nature of the release belies the horror-themed core of the album, but ultimately serves to reinforce it.

As you might think, each track has a lot going on and it’s a lot to take in on first listen. Subsequent spins reveal all kinds of nuances and little things that you didn’t necessarily consciously pick up on first time around.

Choirs and orchestration rub shoulders with Thrash riffs and Blackened croaks. Psychedelic keyboards and operatic vocals join horns and saxophones in backing the distorted guitars. It’s a true melting pot of influences that probably shouldn’t work but it really, really does.

Befitting music that has a lot of different components to it, Graveward features a wealth of guest appearances from well-known members of bands such as Trivium, Dragonforce, Shining, Rotting Christ and The Meads of Asphodel, among others.

Somewhat of a cross between Emperor, Therion, Arcturus and some form of crazy Progressive Jazz, Sigh can always be relied upon to liven things up with their presence and Graveward is no exception.

This is a truly exceptional release that many will probably find overwhelming with its multicoloured assault on the senses. Those who endure, however, are rewarded tenfold for their perseverance.