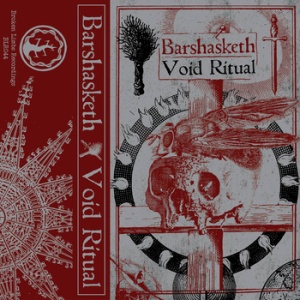 Barshasketh are based in Scotland and Void Ritual hail from the US. Both bands play Black Metal.

Barshasketh play occult Black Metal with an aura of dark majesty. They contribute two tracks to this split, 17 minutes in length.

The first song is named Palingenesis and immediately demonstrates the band’s quality songwriting and ritualistic riffing.

The music is played at all speeds, from a roaming crawl to blasting spite, and Barshasketh sound on top form either way.

Dominion of Ashes is the next track, and it allays any fears you might have of Palingenesis being a fluke; this song is just as good, if not better than the first.

Featuring Blackened riffs that immediately capture your attention and ice-cold vocals forged from malice, Barshasketh once more proceed to blow me away.

The sound is first rate throughout and this is a very impressive introduction to the band.

For fans of Marduk, Deathspell Omega, Watain and the like.

Void Ritual’s 2014 EP Holodomor was very enjoyable indeed, and they return here with a further three songs, 15 minutes in length.

Void Ritual have shorter songs and are an altogether faster proposition in general than Barshasketh.

Heaven’s Gate rips out of the speakers with venom and razorblades, demonstrating everything that I enjoyed about their earlier EP. If anything though, Void Ritual sound more professional now than they did previously.

Not that this is some sterile, ultra-polished commercial hit machine of course; this is still underground Black Metal through and through. It is, however, tight, focused and boasts a sound that’s as evil as it is satisfying.

Benevolent Mother is up next and continues Void Ritual’s penchant for writing enticing riffs that manage to scream Black Metal whilst at the same time sounding a bit different from the norm.

One of the things that attracted me to this band in the first place is that they may be playing a well-worn style but they do it with enough differences and personality quirks to make them stand out from the pack.

The final song is Temple of the Sun and this continues on where the last two left off; engaging riffs, Devilish atmosphere, roaring screams and top songsmithing. There’s nothing to not like here.

After how good the Barshasketh songs proved to be I was concerned that Void Ritual’s side of the split might be somewhat of a let-down. How stupid of me. Void Ritual can hold their own easily enough and remind me of how much I like their output. There’s just something about them.

These two bands play different facets of Black Metal that complement each other perfectly. Topped off with some excellent artwork this is one split you don’t want to miss.