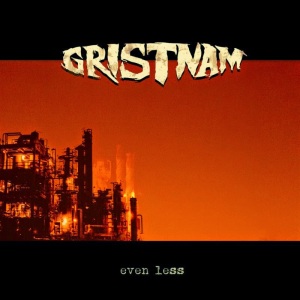 This is underground, aggressive Grind that takes elements of extreme Hardcore’s hateful violence and Sludge’s nasty groove to produce eleven tracks of Grind’n’Roll that is good for what ails ya.

Deep vocals populate the songs with a throaty aggression that fits the music well. The singer has a charismatic bark that has an appropriately Southern twinge to it, adding personality to the bile.

The production is fuzzy and heavy, allowing the band to be their filthy, nasty selves without detracting from the intensity of the music.

The songs have the Southern groove of Eyehategod, the confident swagger of Brutal Truth and the pure-blooded confidence of the Southern Metal scene. Indeed anyone familiar with the hotbed of earthy Metal talent that is Louisiana will recognise the tell-tale signs of this scene in Gristnam’s sound. Yet remarkably, like all of the output from this area, Gristnam have their own personality stamped into these tracks and Even Less is definitely its own beast.

These songs will leave you breathless and I imagine would transform a live show into a heaving mass of sweaty bodies and bloody carnage. The aggressive groove and dangerous assault of Gristnam is positively designed for the live environment.

Even Less has won me over effortlessly. What’s not to like here? Fans of underground, heavy, nasty music will no doubt lap this up, as they well should.