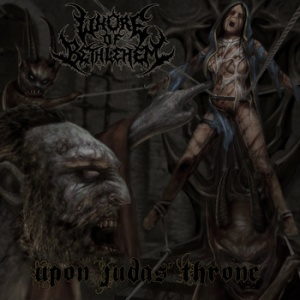 Whore of Bethlehem are from the US and play Blackened Death Metal. This is their début album.

Whore of Bethlehem play Death Metal that’s saturated with Black Metal down to its very core. There is an aura of darkness that pervades everything on this album and it seeps out from every Blackened riff or thunderous vocal.

Said vocals alternate between deep growls and higher screams. It’s a very satisfying performance and both styles do the job admirably.

It’s a pleasure to hear such twisted, Blackened guitars on this release. Straddling the two genres sometimes means choosing between a Death Metal part here or a Black Metal part there; Whore of Bethlehem however have merged the two styles down at the cellular level and their riffs combine the brutality of Death Metal with the evil reek of Black Metal perfectly.

The riffs are evocative and punishing, yet not without nuance. The band work their dynamics well and the guitars have the right balance between feeling and aggression.

Even the production manages to capture the essence of both styles as it’s both heavy and sharp. Everything is perfectly matched against each other, with no one instrument gaining ascendancy to the detriment of any other.

These are very enjoyable songs; I’m quite partial to Blackened Death Metal when it’s done well and I always compare bands like this to Arkhon Infaustus who created in their 2003 album Filth Catalyst what is, for me, an exemplar of the style. Whore of Bethlehem could easily be spiritual successors to Arkhon Infaustus and Upon Judas’ Throne is a very meaty slab of dark Metal if ever there was one.