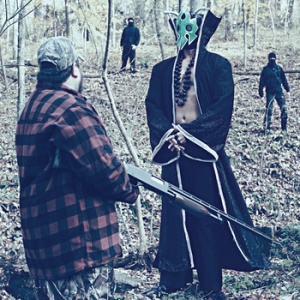 From the US, Ultramantis Black play Hardcore Metal.

The first thing to take in is the album cover, which is very striking. There’s something about it which appeals to me greatly.

Ultramantis Black is a wrestler in his day job, so to speak, and it seems he’s decided to have a stab at some angular, angry Hardcore. I’m glad he has as this is 13 minutes of testosterone and fury.

Vocally he has a thin, piercing semi-shriek that’s buried low in the mix and sounds Punk as fuck. It’s different to what I was expecting and a welcome surprise. The best way I can think to describe it is a snarl, pure and simple.

The vocals being lower in the mix allows the music to take centre stage, and it’s strong enough to do this. For a man who is probably used to being the centre of attention it’s a brave and confident move, but the band of assorted miscreants he has assembled to spread his message know their stuff so it’s an understandable one.

The songs twist and turn, rage and subdue, burn and fade and then it’s over. 13 minutes is not a long time. Alternatively, 13 minutes is a very long time in a choke hold, which this is the aural equivalent of.

Repeated spins show this release to be an ungentle grower, as the guitar riffs become more familiar and the unexpected song directions become easier to navigate.

I have a long-running soft spot for this kind of music stemming from a period years and years ago when I was absolutely obsessed with it. I still love it now and it’s always great to hear it done so well.

You can see why a label as prestigious as Relapse snapped this up – this is right up their street and is of the highest quality, especially for a début release.

Give this a whirl and prepare to be floored.