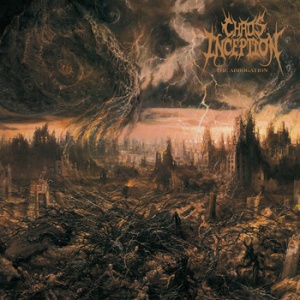 US Death Metallers Chaos Inception play such a chaotic whirlwind brand of Death Metal that it’s easy to get blown away by and miss out on just how much is going on in these 9 tracks.

Imagine a band like Morbid Angel only with the technicality and speed ramped up to the max. Chaos Inception mean business.

There is a relentless frenzied feeling to this album that is just short of an animalistic, instinctive craving for destruction. Having said that though there is nothing simple about this music; the band seem to have sharpened their attack to a fine point and the guitars in particular show some considerable musical muscle flexing.

It’s easy to like this kind of Death Metal, (assuming you’re a fan of complete extremity in the first place of course), as it just sweeps up anything in its path and dumps it unceremoniously into the grinder when it’s done. The instruments are all played extremely well, presumably by plague-ridden demons, and the album is just a treasure trove of brutal delights.

All of this adds up to an album that has a feeling of savage malevolence and ultra-violence. Chaos Inception will rip off your face and laugh at your misfortune. And they’ll do it at speed before you’ve even noticed.

For fans of real Extreme Metal only; if this is you then this is a must.