Barishi have recently released their self-titled début album, the review of which you can see here. A harsh, angular, progressive Metal treasure trove; this is an album with a lot to give to those who crave experimentation and music that forges its own path. Their guitarist was nice enough to answer some questions I threw at him…

Hi! For people who are unfamiliar with your band please introduce yourself!

Hi, I am Graham Brooks, I play guitar in Barishi. We are from a town called Jamaica, Vermont. We have been playing together in various forms since high school, about four years ago.

My favorite metal band is Iron Maiden, I am also a Beatles nut. We are all big Mastodon and Meshuggah fans. Jon (our bassist) and I are both really influenced by bands like The Cure and MBV. Our singer Sascha is a huge funk fan and also is a Queen and Led Zeppelin fanatic. We draw from a lot of those bands and a lot more that I can’t think of right now.

I have been listening to “So” by Peter Gabriel. I think it is incredible. I am sure a lot of full-metalists wouldn’t be into it but I think it is a great album. I have been digging on this band called “Anciients” who kill it and a band from chicago called “Yakuza.” I highly recommend both if you are looking for some metal that comes out of left field.

You have an unusual sound that fuses Progressive Metal with more 70’s-style Proggy vibes, all wrapped up in with elements of more modern avant-garde bands such as Ephel Duath, (at least to my ears anyway!), how did you go about deciding on the sound that you wanted as a band?

Cool! Honestly we never really talked about what type of sound we wanted to go for. I think we sound the way we do because we never had one of those talks. Some of the songs that we like playing the most came about because someone in the band wrote something that made us say “I don’t know if that would work in a heavy band” and then we would try it and it would sound cool. I think the freedom to do that had a big impact on how we sound.

I love the angular guitar work on this release. How do you write your songs? What’s the process involved?

One of us usually has a riff or something that they will come into practice with and then we will just try to expand on it. We don’t really have any method or go about writing in an organized fashion. Sometimes it can be a shit show because we will be writing 3 different songs that we think sound cool and we will end up abandoning all of them because we get overwhelmed with all the little parts that are floating around.

After seeing the album art and band pictures, your album surprised me slightly as it contains more harsh and more abrasive moments than I was expecting. Was it a conscious decision to embrace the heavier aspects of music just as much as the more mellow/melodic aspects?

I think we just naturally got heavier. We play with a ton of bands who are way heavier than we are and I think some of it rubbed off on us.

With an eclectic and diverse album like this I can imagine possibly having parts of it that were potentially divisive when creating it – where there many discussions in the band about which parts to keep/throw out/change/etc.?

We wrote a lot of stuff that did not end up on the record. Usually when we did not end up using something it was because we just were not digging it that hard. We try to keep the songwriting process as democratic as possible. If someone really does not like a part or song we usually will end up changing or discarding it. Fortunately everyone in the band understands and it doesn’t require a long talk most of the time. 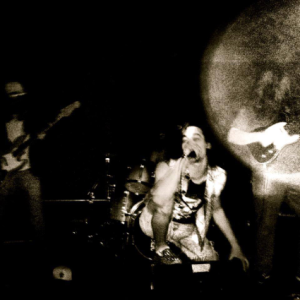 Are you happy with the finished album? Is there anything you would change next time?

I am. We had a lot of fun recording together and I think the album represents what we were doing for the past year. Brian Westbrook who produced the album is an amazing musician and producer. Thanks to Brian the album sounds way better than we ever thought it would. In terms of things I would like to change, I would really like to record an album down-tuned. It adds a really guttural element that I love.

As I said in the review; my favourite track is Through Mountains, Through Plains. It’s brilliant. This is less of a question more of a comment really! This is also the longest song on the album – do you see yourself going for more of the longer, epic-style tracks in the future?

Thanks so much for the kind words. I love writing long songs. I am sure that we will have some longer songs in the future.

What does the future hold for Barishi?

Hopefully a lot of touring. We love playing shows, it is our favorite thing to do. I think all we want is to play as much as possible and keep on recording. Hopefully at some point we will find a label that is a good match.

Thanks for your time Graham!

One thought on “Interview with Barishi”