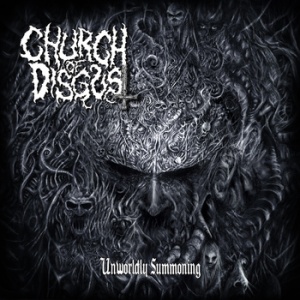 After a perfunctory intro we’re into the album proper. The first thing that strikes the listener is the powerful sound – thick, heavy guitars and drums that drop like a hammer. This band play filth-heavy Death Metal with an atmosphere and tone so covered in grime and dirt as to become one with it.

So adept at channelling all things Necro are they that most underground Black Metal bands would kill for this sound. Imagine a band like Anaal Nathrakh if The Codex Necro was diseased Death Metal instead of Black Metal.

Add to this some nice Incantation-isms; the odd dash of Obituary and Autopsy; a small sprinkling of Usurper; an injection of sludge; cover this all with a rotten layer of offal and leave to decay for 100 years and you have something close to what Church of Disgust resemble.

And the vocalist – what’s all that about? How did the band manage to convince a real demon to front the band? I mean, it’s not a human being right? I can only assume that the Unworldly Summoning was a success and something dark and evil that time forgot came slithering out of the dankest crypt to be held in thrall to Church of Disgust and do their bidding. Their bidding, of course, being to produce the sickest, most evil Death Metal noises heard for some time. I just hope they feed it regularly.

Unworldly Summoning is ugly, hostile and wants everything dead. In other words it is one of the best death metal releases heard in a while.

If you want the latest in clinical, state-of-the-art, precision-laser-produced Death Metal hot off the production line then this is not for you. If, however, you’re not scared of a bit of blood and muck on your Death Metal then there is nothing to not like here.