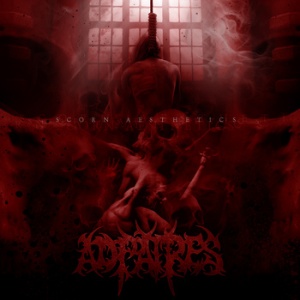 I am a fan of all types of extreme metal, although I definitely go through phases where I favour one particular genre or other for a while. Sometimes it may be Black Metal; sometimes Grindcore; recently I went through a massive Doom-favouring phase. At the moment it’s Death Metal; specifically Brutal Death Metal. Which brings me to Ad Patres; a French band who fill this need of mine perfectly.

The songs are well constructed, well played and the album has a good clear sound. Ad Patres not only have great energy in their songs, but they also display an above-average grasp of dynamics and songwriting skills which makes for an album that is very enjoyable but that also has longevity and won’t simply be forgotten in a couple of weeks. And let us not forget the riffs! Plenty in abundance.

Some Death Metal can be very one dimensional, but this isn’t just pure blasting brutality; there are also slower sections as well as some nice solo’s and melodic sections. A perfect example of this is a song like To the Fathers which is as brutal as anything for the most part, but has a section near the latter end of the song where the brutality eases off and we get a slower, more melodic and emotive section that is very well done indeed.

A top quality album – I highly recommend this to anyone who likes their Death Metal.