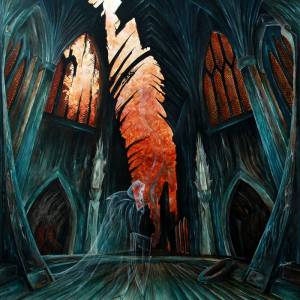 Illusions Dead are from Finland and play Blackened Death Metal. This is their début album.

The style here is based on Death Metal with a Black Metal influence to the guitars, allowing the band access to a wider array of melodics and auras than a pure Death Metal band.

High screams form the bulk of the vocals, although deep growling vocals do appear as the main form of attack on some tracks. The singer’s growls are very well performed and he has the kind of voice that’s easy to enjoy. The high screams are equally competent though, and very enjoyable to listen to, although it would probably be even better if a few more of the growls were used here and there, but that’s just me.

The songs are well-written and there’s a lot to enjoy across these 42 minutes. The band seem to understand pacing and texture, with the songs having a lot more depth than is the norm for the style. I especially like songs such as Revolution (Celestial Spheres) where the band extend the music into almost progressive spheres to add further substance and meat to the music.

Leads and melodies are used well and not overly relied upon at the expense of brutality; there’s a nice balance of the two. When combined with the emotive qualities of the rhythm guitars it makes for a compelling collection of tracks.

The album has a good sound that’s rough around the edges in the right ways. Combined with the strength of the music it makes for a very satisfying package, all-in-all.

This is a really strong release. It offers something more than just straight-ahead Death Metal and is an extremely meaty feast of Metal delights.