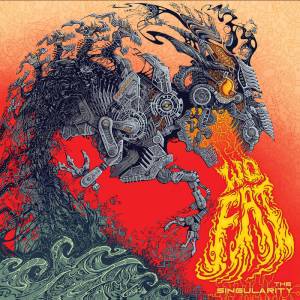 Wo Fat are from the US and this is their seventh album of doom metal.

With seven tracks and a duration of 76 minutes, this is a mammoth album. Wo Fat’s style can be described as a mix of psychedelic, stoner, and blues-infused doom metal.

It feels like The Singularity combines structured songwriting with free flow jams, although the former aspect is much more prevalent than the latter, as you would expect. The songs are long and exploratory, and it sometimes feels like Wo Fat don’t actually know where they’re going with parts of the music until they get there. In the hands of a less-capable and experienced band this could easily be a disaster, but thankfully Wo Fat know what they’re doing and keep everything on track in service of the songs’ ultimate goals.

Wo Fat have a knack for unleashing fuzzy grooves that you can’t help but move along to, and The Singularity is packed with these. The band do heaviness very well, and there are lots of choice riffs to headbang to here. Alongside this though are the textured explorations, psychedelic workouts, and improvised jams that pepper the album. These add atmosphere and depth, and entice the listener to lose themselves in the music, which it is all too easy to do.

Each track is a great example of how to play this sort of music without falling victim to the many generic pitfalls that plague stoner-style doom acts. Wo Fat have managed to successfully carve out a corner of the stoner cosmos for themselves over the years, and The Singularity finds them consolidating their hold on this region even further.

The Singularity is one of the best stoner doom albums I’ve heard in a while. It doesn’t really throw any surprises the listener’s way, but just does what it does very well indeed, and takes the listener on a psychedelic sci-fi journey that’s not soon forgotten. There’s a lot of sights to take in here, and a lot of meaty content to digest, but trust me when I say that Wo Fat’s latest is worth spending some quality time with.