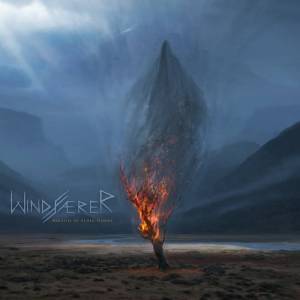 Windfaerer are a black metal band from the US. This is their fourth album.

I enjoyed Windfaerer’s second album from 2105 Tenebrosum, but it’s taken me until now to catch up to the band again, so I missed its follow up. I was determined not to miss Breaths of Elder Dawns when I saw it appear though, and I’m very glad that I didn’t.

Well, Breaths of Elder Dawns is nothing if not ambitious, and from the first epic and stirring moment of opener Oxalá, it’s very clear that Windfaerer aren’t phoning it in on their fourth album.

The band’s blackened material is effortlessly fused with folk influences, whether this be in the form of melodic enhancements or additional folk instrumentation. Orchestration from violin, viola, and cello add much to the music, while the core blackened songs that underpin everything are well-constructed and delivered with passion. Each song is a world unto itself, and any of the seven songs here could be an exemplar for the album’s quality, (there are also two short interlude tracks, which add extra flavour to the album’s flow).

The songs contain a multitude of creative and melodic textures. There are many standout moments, and a wealth of good ideas. It’s a catchy and infectious release, but one that’s been written in such a way that it also has depth and substance. The songs may have much to enjoy upon first listen, but it’s on later, repeat visits that you get the most out of what Windfaerer have created here.

The album has a very rich, vibrant sound. It almost feels three-dimensional, as if you could reach out and touch the strings of the instruments, or grab a drumstick as it pounds out a beat. There’s an emotive potency here that I find lacking in most folk influenced blackened outfits, but not Windfaerer; they’ve nailed their sound down too well for that to be found lacking in their music.

Despite its 64-minute duration, Breaths of Elder Dawns never outstays its welcome. The quality of the music – both in terms of sonic texture and memorable songwriting – is striking, and it’s not an album to easily ignore.

Windfaerer are back and they sound bigger, better, and more epic than I’ve ever heard them. Breaths of Elder Dawns is sure to turn many heads, and rightly so. If there were any justice in the world, this would be the band’s ticket to the major leagues.

Essential for fans of the style, and even very highly recommended for those who normally aren’t so much.