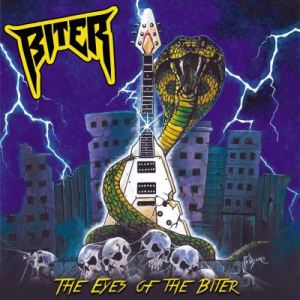 Biter are a Brazilian heavy metal band and this is their debut album.

At only 22 minutes this is a rather brief listen for an album; why this is classed as a full length rather than an EP is beyond me, but I don’t suppose it matters in the grand scheme of things

However, what The Eyes of the Biter lacks in playing time, it makes up for in raw attitude and authentic metal passion.

Mixing classic heavy metal with some lashings of speed metal, the tracks on The Eyes of the Biter are scrappy metal songs, wild and delinquent and looking for a fight.

The singer has a deeper voice than I was expecting; a lot of his delivery has a calloused edge, although he does vary his range, of course. He’s just as rough and ready as the music is, and I warm to his style the more I listen to this release. Both the singer and the music are not without a certain charisma, either.

Biter still have some way to go if they are to become a force in the heavy metal underground, but based on The Eyes of the Biter, they’ve given themselves a good start.