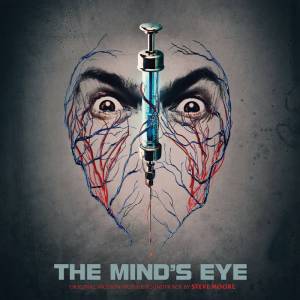 Steve Moore, (Zombi man), turns his hand at creating another soundtrack. I don’t normally listen to soundtrack work, but as I like Zombi, I decided it was worth giving this one a try. I’m glad I did.

There are a lot of moods and feelings at play across the 86 minutes on this release. All of them are arguably cut-short in typical soundtrack style, leading to somewhat of a grindcore-feel, (only synth-based); there are after all, 33 tracks here, most of them quite brief.

The majority of material on The Mind’s Eye is heavily atmospheric, and this is punctuated with tenser pieces that speak of something momentous either happening or about to happen. As well as these we also get some more action-oriented works, occasionally driven by pounding beats, but more often with a minimalistic pulse of synths and keyboards.

Ambience and bombast go hand hand-in-hand then, and the entire soundtrack has a feeling that is somewhere between the 80s and the 90s. It alternates, for me, between action scenes and calmer, reflective, atmospheric scenes where you can almost imagine people staring into space and considering the cosmos. Which type I prefer largely depends on my state of mind, but I’m pleased to say that the two moods complement each other surprisingly well.

How all of this relates to the actual film I can’t say as I haven’t seen it. However, I will say that the soundtrack has made me want to see the movie and experience how the visuals, etc. work with the score, and vice versa.

Steve Moore is clearly a talented man, (which we knew anyway), and this is an enjoyable listen. What I would dearly love more of, however, is for him to turn his hand at creating this kind of thing unfettered by the restrictions of the soundtrack format. Long, luscious soundscapes of this kind of music, spanning many different moods and feelings…now that would be a definite winner.

For now, we have The Mind’s Eye (OST). Enjoyable in its own right, but merely a tantalising glimpse of what could be.