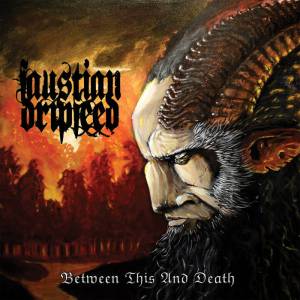 This is the debut EP from Nowegian melodic death metal band Faustian Dripfeed.

You never quite know what you’re going to get when something is described as melodic death metal, as frequently it ends up being something that has little or no actual death metal content. Well, this is certainly not the case with Faustian Dripfeed. This is, (almost), exactly what it says on the tin; 19 minutes of melodic death metal – death metal that’s melodic.

With a chunky, solid sound, the band tear out of the speakers with muscular barbarity. It’s fast paced, frequently using blast beats to get across its message. When the band slow down they easily drop into a heavy groove that sees them peel off the riffs with ease.

The band are confident enough to add some other ideas into their music; a few lighter bits and enhancements here and there to add depth. The melodies are well-judged; having impact without being ostentatious. I like the solos too.

The singer has a daemonic growl that’s pitch black and inhuman. His is a proper deathgrowl, full of promises of monstrous carnage and violent strength. High-pitched screams appear as well on occasion. Some cleans are used on Kalibrer Ditt Moralske Kompass and A World of Emptiness; the former quite subtly done, and the latter a bit more in a 90s death/doom style.

The songs are enjoyable affairs with a love of metal on full display throughout. The band have a 90s sound to their music on some ways, with the music reminding me of Illdisposed and Konkhra in places.

One thought on “Faustian Dripfeed – Between This and Death (Review)”