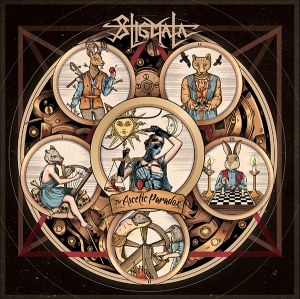 Stigmata are from Sri Lanka and this is their fourth album. They play Heavy Metal.

Wow, okay, so here we have a bit of everything from Death to Nevermore to Iron Maiden. The band play technical and involving music that’s as varied as the influences suggest, all within the overarching template of Heavy Metal.

At 58 minutes in length, and touching on a wide-range of Heavy Metal bases, there’s a lot going on here.

It’s clear that the band are Hellishly talented and have grand ambitions for their art. Frequent musical sidesteps are taken so that you never quite know what’s just around the corner. Some of the playing on this release is jaw-dropping.

Full of grand melodies and even grander ambition, The Ascetic Paradox is a wild ride through various corners of Heavy Metal’s map, paying tribute to the greats while also spinning the threads of the Metal fates to their own ends.

The vocals are equally as varied, taking in everything from shouts, slithering screams, cleans to air-raid siren howls.

The production is a little uneven in places – I could do with the guitars feeling a little fuller and larger, but it doesn’t spoil the songs, just doesn’t let them reach their full potential I feel.

This is very impressive, but I feel would benefit from being re-recorded and tightened up in a few places. Don’t let this put you off though as Stigmata have produced an album that wins more than it doesn’t.