Fall’s début album The Insatiable Weakness is a catchy and memorable slab of Melodic/Progressive Death Metal that sounds fresh and vibrant in its delivery. Intrigued by what I heard, it was time to dig deeper…

My name is David Gutierrez. I play bass guitar in Fall. I’ve been playing bass guitar since I was about 13 (im 25 now) I love melodic death metal, progressive metal, classic prog, doom metal, and all the classic metal stuff.

Give us a bit of background to Fall

Fall started in 2009 as Jessie’s outlet for his musical inspirations. He recorded a solo demo that got him respect in the community locally. At that time it was just Jessie and another guitarist and drummer for live shows. I was in another band on bass when Jessie asked if I wanted to be a part of the group. From then on we’ve been close band mates and even recorded an EP with Jon Howard of Threat Signal fame as well as Bjorn Strid of Soilwork. Since then it’s been shows around the big state of Texas and also a short run through the west coast which was fun. After that and a few lineup changes it brings us to our present day where we’re on the verge of releasing this album of new and older material.

As far as bass guitar. I love the work of David Ellefson of Megedeth due to his tight picking and speed. Next would be Joe Lester of Intronaut with his unique approach to fretless bass in metal. Martin Mendez of Opeth with his groovy basslines and ability to hold down solid riffs. Many others as well. I prefer a bassline that adds to the guitar and drums but also pushes what can be done

Currently I’m listening to the newest albums by

Intronaut – The Direction of Last Things

The Dear Hunter – Rebirth in Reprise

And an older album of like to put out is Audrey Horne – No Hay Banda. Confessions and Alcohol is a solid heavy rock song. You can tell there is some metal influence in there. Another Spotify recommendation that struck me!

Give us a bit of background to The Insatiable Weakness – any particular concepts or ideas you want to discuss?

The album is really a moving piece. A lot of darkness and bleak themes. It goes into the depths of your soul in a way and brings out those wounds.

Jessie will usually present a few ideas and riffs. From there we will arrange them accordingly and then each one of us will add in whatever pieces needed to make the song pop. We all agree on everything before we play it or record it

In my review I state that the album has “a beguiling mix of heaviness and catchiness” – was it important to get both aspects of the band’s sound equally represented?

Yes, very important. I like to think of the band that way. Pummeling riffs and fast passages, the catchiness you hear is influenced by our love of having choruses that people can chant along with live. We love the crowd interaction. 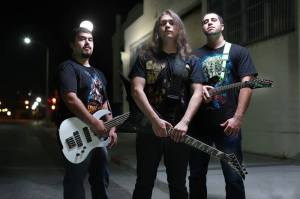 It was a rough and arduous task for us all. Balancing work and personal lives to come in and put it all on a recording. The time we took was necessary to get the final product. I think it takes time to make something you’ll be proud of. It’s a craft that must not be rushed

How did the Soilwork connection come about?

We had previously worked with Bjorn Strid on our EP. Which led us to an online friendship with him. When we opened up for them in Corpus Christi we got to meet the whole band and hit it off. Dirk liked the music so when it came time to look for a recording drummer he was happy to oblige.

Harvester. I would say I really loved everything I did on that track on bass, the little interludes and soft middle break are some of my favorite basslines I’ve written. That and being accompanied by a fellow Texas artist Jessie Frye. Her vocals soar in the track and provide a breath of fresh air in my opinion. We were happy to have her on it.

What does the future hold for Fall?

More shows, more touring, more songs, and an aggressive push towards our branching out and getting noticed.