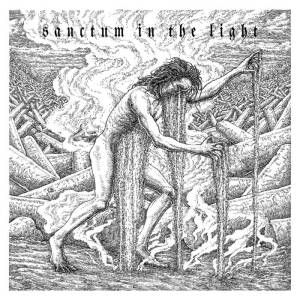 Of Spire & Throne are a UK Doom band and this is their début album.

Having enjoyed their previous work, (Toll of the Wound, for example), it’s about time we had a full-length release from this colossal Doom band.

Yes, colossal is the right word, as Of Spire & Throne specialise in dirty great huge Doom with an oppressively dark atmosphere and a morbid pace.

The 4 tracks on this release crawl by as the 54 minutes is taken up by malevolent Doom that has a filthy Sludge underbelly. There’s also a bit of Ambient/Drone/Noise thrown in here and there for good measure.

Sanctum of the Light contains music that does a lot with a little. There’s nothing fancy or flashy here, quite the opposite in fact; this is a band that achieves what they need to with a minimalist approach that still sees them sound louder and fuller than a band with twice the members, (they’re a three-piece).

This simplistic approach works well as the songs have a raw honesty to them that allows an emotional intensity to be fostered in the bowels of these despairing paeans to negativity. Simply put – the band know how to write good Doom.

This is a release that draws you in with the promise of crushing Doom and keeps you close in its suffocating embrace by providing music that has more than enough depth to drown in.

2 thoughts on “Of Spire & Throne – Sanctum in the Light (Review)”