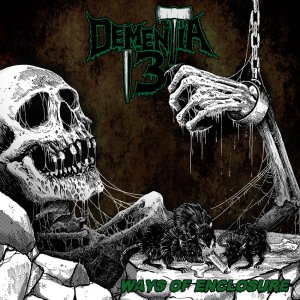 Dementia 13 are a Death Metal band from Portugal. This is their début album.

Sometimes only Old-School Death Metal will do. Yes, it’s always nice to hear the latest in TechDeath fusion, or the latests sophisticated Avant-Garde Black Metal opus, or some new-fangled take on Doom…but sometimes you just want something primitive, ugly and swamped in Death Metal’s rich heritage. For times like that, there’s bands like this.

This is horror-inspired music, with each track finding inspiration in a different film.

With a decent sound that means the guitars sound good and heavy while the bass is actually audible, Dementia 13 take a festering, decaying sub-genre by storm and kick up some dust and muck while they’re at it.

This is a very satisfying release. The tasty riffs and deep, growling vocals hit the right spots and Ways of Enclosure is full of grim, filthy Death Metal that manages to capture the spirit of the Old-School style perfectly without sounding stale or tired, as so many do.

The singer’s voice is perfectly gruff but still surprisingly legible. His throaty growl tears along over the steady pace of the music, while the guitars throw out riff after riff and dark tidings aplenty.

Fans of Bolt Thrower, Massacre, Entombed, Autopsy and Six Feet Under will find a lot to enjoy with Dementia 13.

One thought on “Dementia 13 – Ways of Enclosure (Review)”