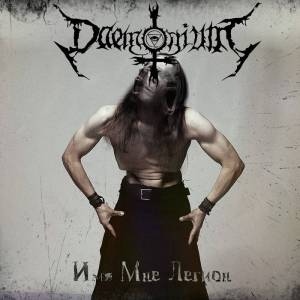 Daemonium are a Ukrainian Black Metal band and this is their début album.

Here we have a release full of savage Black Metal with a distinct Scandinavian quality and lots of evil feelings.

Evoking the spirit of bands like Marduk, Dark Funeral and Naglfar, as well as Dimmu Borgir and a taste of Emperor; Daemonium proceed to blast and pound their way through these songs like they really mean it.

This is somewhat of a nostalgia-inducing release for me as it takes me back to the late 90s period of Black Metal. This is no bad thing really, as Имя Мне Легион is produced, performed and delivered with real passion and bile.

The singer has a great, throaty rasp that is perfect for this style of music. He’s not adverse to going deeper too and his vocals never seem too far away from the action.

This album is packed full to the brim with Blackened, frosty melodies and razorblade riffing. Subtle keybaords lurk in the background adding extra flavour and their contribution shouldn’t be discounted.

I do enjoy this style of balls-to-the-wall occult Black Metal. The feeling of malevolent brutality and otherworldly sped-up hatred is a tough one to beat. The fact that it also comes wrapped up with an extra atmospheric element, thanks to the keyboards, is just a bonus.

Although the style is an old one, Daemonium play their Black Metal with such enthusiasm that it’s hard to be dismissive; plus the fact that they genuinely seem to know what they’re doing means they have written a really enjoyable album.

I’d definitely recommend this one for your further investigations.