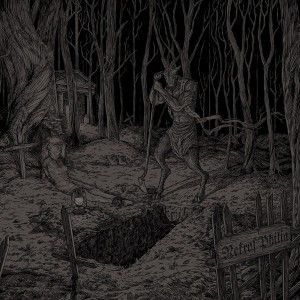 Lord of Pagathorn are from Finland. This is their début album of Black Metal.

Now this is the stuff! Underground Black Metal that’s both scorching and frozen to the touch. The fires of fury and the frost of winter combine in Nekros Philia.

Lord of Pagathon have got Black Metal’s aura of frosted damnation and Hellish torment down to a fine art. The vocals scythe and scathingly burn whilst the guitars ply their dark melodics and groovy Blackness like they were born to it.

The blistering speed is offset by mid-paced malevolence and small interludes. The band successfully set the stage for their icy Black Metal and then populate it with Blackened fire and storms of razor sharp ice.

This is passionately played and delivered with real bile and venom. There’s a palpable aura of darkness and hatred emanating from these songs and you can feel the weight of Black Metal history pressing down as you listen.

Lord of Pagathorn have produced an album that documents an aural descent into the maelstrom and straight into the heart of the abyss.