The début album from Algerian band Lelahell – Al Insane… The (Re)birth of Abderrahmane – is a welcome breath of crushing air in the Brutal Death Metal scene. I wanted to find out a bit more about this exciting new band…

Give us a bit of background to Lelahell

Lelahell are one of Algiers’ newer extreme metal acts, their concrete-crushing death metal bludgeoning skulls since 2010. Founded by Redouane Aouameur (A.k.a Lelahell) who is no stranger to the Algerian metal scene as he has already been in other bands including Neanderthalia, Litham, Carnavage and Devast. Following the completion of 2011’s ‘Al Intihar’ EP, fellow Algerian metallers Slave Blaster and Nihil (who also form the rhythm section of black metal outfit Barbaros), completed the ranks. In 2012 Goressimo Records officially released the band’s debut EP. 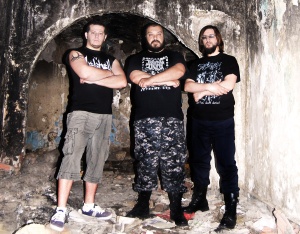 We don’t have any particular influences , we get our inspiration from everything which is related to death metal and all brutal stuffs and some local music.

Hideous Divinity a great death metal band formed by ex members of Hour of Penance and Eyeconoclast from Italy, their music is technical modern melodic and brutal!

How did you decide on the style of Death Metal that you wanted to play – what appeals about this style of music?

We haven’t decided anything, we just played the music that came from our deep guts!

Do you have any goals for your album?

Our main goal is to make music, play all around the world and of course having fun!

Is there anything on the album you’re not satisfied with?

For a first album we are really 100% satisfied!

Do you want to discuss any of the lyrics on the album and any themes/hidden meanings/etc. that might be there?

The song “Al Intissar” is an hymn to victory and all against those fuckin’ losers who complain all day long without doing anything from their lives. Move your ass fucking assholes! “Voices revealed” is inspired from the memories of Phillip Garrido a serial killer, Hypnose is a message to all our governors in the planet ! Am I in hell? is a question that every one asked at least one time in his life, Kalimet essir is a tribute to our Martyrs, Black hands is about the difference between the rich and poors , “Hillal”, has a more philosophical concept and it is about the interaction of the human with the nature and Mizmar talks about the human pleasures!

In general I come with the main guitar riff and structures and other musicians compose their own parts during rehearsals.

Increasing a little bit the ethnic parts and adding more technical and modern elements to the guitar are the main changes in the future ! Wait and see…

What does the future hold for Lelahell?

For December we have a European tour planned in Germany, Switzerland, Poland and France. It is called Al Insane Tour. After that we’ll start the writing process of our second full length.

Thanks for your great support and stay brutalz!