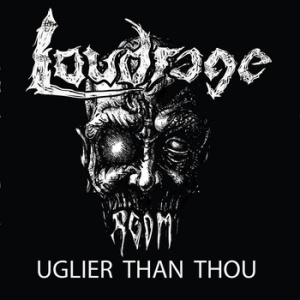 Ugly music indeed. Heavy and battering, but with unexpected melodic flourishes now and again. Loudrage come from Romania and play Death Metal that’s heavy on the groove, reminding of classic bands like Grave and Konkhra in their heyday.

The first song Doomed is a classic-in-the-making, such a good song it is. I was expecting this to be a one-off but then the second song As Long As I Live is similarly impressive, (although not quite as good as Doomed). The rest of the EP follows on in a similar vein – top-quality, well-written songs which are catchy and have rhythms and riffs to die for.

Each song shares a similar construction; mid-paced, groove-laden, almost-Swedish-style Death Metal that really knows how to wield hooks, riffs and songwriting skills to get the most out of this style of music. Each song is menacing and bouncy at the same time, (as odd as that sounds), and has an energy that is undeniable.

The vocalist is excellent. The deepness of the growls touches something primeval inside and has all of the bowel-loosening qualities necessary to be incredibly satisfying. The higher screams are equally proficient.

The EP has a strong, clear, crunchy sound that fits the songs like a glove. An iron glove made for SMASHING!

I am genuinely surprised by how good this EP is. A band I hadn’t heard of coming out of seemingly nowhere who somehow appear to have delivered an absolute triumph of a release. How they remain unsigned is beyond me. Go and get this now.