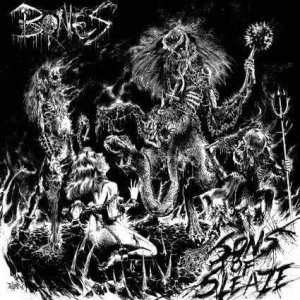 US group Bones’ second album doesn’t mess around; no silly intros or anything just straight into a simple guitar riff and then into the action. They play a primitive brand of Death Metal and Crust that is positively rabid.

They bang, crash and wallop their way through twelve songs, (including a Terrorizer cover), and at the end of it still have giant maniacal grins on their faces that lets you know they’re in this for the long haul and they aren’t going away. And nor should they.

This is a band who don’t care about sounding polished. This is proper, raw, underground music for people who know what they like. The weakest link for me personally in most bands with a rawer sound is usually the drums, but here they have an organic, analogue sound that propels these mangy tracks forwards and upwards so the rawness works in their favour and not against them.

Bones do slow and mid-paced perfectly well, but for me they really shine when going all out in top gear. Snarling and foaming at the mouth; these are the songs that make you sit up and take notice.

This is music that just couldn’t care less. It’s not for everyone, but nor should it be. If you are in the mood for some no-frills aggression in a very raw, old-school Crust style then you could do a lot worse than popping this in the player.