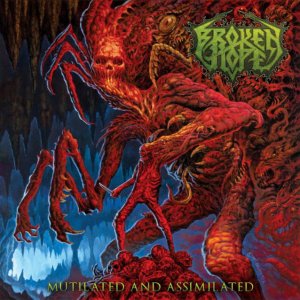 Broken Hope are a US death metal band and this is their seventh album.

Veteran death metallers Broken Hope are unleashed on the world once more. Hell yeah! I’ve always had a soft spot for Broken Hope, and Mutilated and Assimilated has just brutally smashed that soft spot so that it’s now just a gory mess.

Broken Hope have always been good at delivering brutal death metal that combines barbarity with some extremely sexy mid-paced groove. Some of the riffs on some of their songs over their extensive history are impossible not to move to. I’m pleased to say that the same can be said of Mutilated and Assimilated.

No matter the speed they play at though, this is quality stuff. The fast parts assault the listener with a brutal, withering assault of blistering intensity and punctured melodies that seem secreted from the rhythm guitars. When they slow down and lock into an ugly groove though, this is when some of the really choice riffs present themselves.

I’m a fan of decent guitar solos in general, and there are some proper metal ones on this album. When layered over a particularly satisfying riff or launched at hyperspeed with the blasting drums, it all works a treat and gets the blood pumping in no uncertain terms.

Even some of the band’s more atmospheric proclivities are intact and well. Obviously these are few and far between, but this side of the band is showcased well on tracks like Malicious Meatholes, (contrary to what you might expect from the name!).

The vocals are as guttural and deep as you would want from Broken Hope, despite having a different singer to their early work. He does a great job and his savage growls are utterly compelling.

The songs themselves are as well-written and enjoyable as any of their work. I’d even go as far as to say that Mutilated and Assimilated could potentially become one of their best albums, given more time with it. After already multiple listens though, what I can say is that it’s definitely up there with the best of them, and there’s so much to like here it’s just silly.

This is hideously infectious and enjoyable brutal death metal – make sure you listen to this.

One thought on “Broken Hope – Mutilated and Assimilated (Review)”