Craven Idol are the real deal. Their latest album The Shackles of Mammon is an absolute scorcher. As with the best of releases; the more you listen to it, the better it gets.

As I said in my review of their latest creation – this is old-school quality with new-school fury and bite. It’s partly this combination that gives Craven Idol such a distinct personality, one that definitely sees them stand out from the hordes.

Introduce us to Craven Idol

Craven Idol is an old school extreme metal band from North London, United Kingdom formed in 2005 by Scourger and I (Vrath). We are just about to release our second album ‘The Shackles Of Mammon’ via Dark Descent Records. The current line-up is Heretic Blades (drums), Suspiral (bass), Obscenitor (guitar), and Vrath (vocals, guitars).

That is a very big question right there! We are certainly not influenced by any one genre or band, neither are we a ‘worship’ act. However, I would say that the bands that inspire us most are the likes of Bathory, Sodom, Candlemass, Gospel Of The Horns, Venom, Poison (Ger), Manilla Road, Master’s Hammer…however, the music that we truly aspire to is anything that possesses the attitude of the first wave of a genre. When there are no rules, when the genre tags don’t matter. It is this blend of freedom that metal is all about for me. Just play it straight from your rotten soul.

So recently I’ve found myself listening to the old classics again, in particularly Under The Sign Of The Black Mark by Bathory; easily their best album. As I write this I’m spinning ‘Into Glory Ride’ by Manowar, but that really isn’t for everyone. That second album is definitely their best work, along with ‘Hail To England’ (you know, back when they weren’t a self-parody and Eric Adams still had the voice of a God). As for new stuff, I did enjoy the recent(ish) Mortem, D666, High Value Product, Dungeon, and Dysemblem releases (from the top of my head!).

Tell us about The Shackles of Mammon

Where to start!? It is our second full-length to date, and the successor to 2013’s ‘Towards Eschaton’. It consists of eight tracks and is just over 40 minutes in length. It’s our first album without guitarist Scourger, but also the first featuring new axeman Obscenitor and drummer Heretic Blades. The album is a big step up musically (especially on lead guitar), and whilst it is not drastically different from its predecessor, it’s certainly more varied and aggressive. It’s our second album overall, as well as our second on Dark Descent Records.

How does it feel to have your second album about to be released to the world?

It feels good. The wait tends to feel absolutely endless. From when you wrap up in the studio –which we did late last August – it’s always such a painstakingly long time until it’s actually out (and this is commonplace too)! PR must be arranged, material printed, artwork submitted. Takes longer than you’d think! Anyways, I cannot wait for the album to be heard by people. I believe we’ve created something rather special here.

How do you go about writing and arranging your songs?

It is a lengthy process and I’m actually quite glad to say that we haven’t fallen into any sort of routine with it as yet. We approach every song completely differently, rather than with a formula. However, on a basic level, I tend to write the riffs (or draw from a large collection of riffs dating back to 2006) and write a basic song structure. I then bring this to Heretic Blades and we create a first draft of the song. It depends entirely on the track how long this will take. May take one session, may take months. Once the draft is done, we play the song as a band, add leads, solos, vocals, the lot. After that we record and produce a demo to approximate what the song might sound in its final form. This goes on as many time as it needs to really. I think all in all, that’s quite a common approach…a very organic approach.

My favourite song on the planet is ‘The Trudge’ because it comprises all the elements of the band in one. Though, I must admit it’s hard for me to pick a favourite, ‘A Ripping Strike’ is also a contender for sure.

Can’t claim there to be a method to the madness there. The key is to balance the album to make for a continuously intense, but not too repetitive listening experience. Lots of beer, whiskey, and patience through long sessions mainly. Ultimately, even if you’ve decided on a track order before the studio, this often changes depending on how the tracks end up!

Tell us about the album cover art

The artwork is by Daniel Corcuera, however, its story reaches back to 1896, to a woodcarving by Sascha Schneider named ‘Mammon Und Sein Sklave’. The image shows the Demon of Avarice, Mammon, holding beyond the reach of mankind the measure of all his dreams – currency – indicating greed, narcissism, and the ultimate destruction that is depicted in the background. 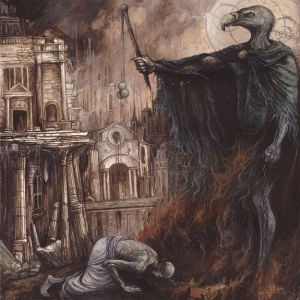 What are your ambitions for the release?

My main ambitions were to create an album that I would like to hear and own on vinyl. I listen to music mainly on wax, so it is very much the medium that I consider during the creation stages. I don’t harbour dreams of world dominance, but merely an ambition to create an honest and solid album.

How do you think The Shackles of Mammon compares to Towards Eschaton?

Without taking anything away from ‘Towards Eschaton’ it is a way less consistent album when it comes to quality. We’ve grown into a powerful song-writing team since then, whilst ‘Eschaton’ is more of a collection of songs from a long time span. Shackles is also way more intense and varied an album with a more suiting production (Eschaton was always too clean for my liking to be brutally frank). Either way, Shackles continues where Eschaton left off – in the deepest lockers of hell… and dives even further into the fire.

How do you think you fit into the extreme music scene in 2017?

I don’t think we do, to be honest. The extreme music scene is contrived these days, with bands of very little substance being heralded the kings of the scene just because they have managed to become really really good at sounding like someone from the past.

Dark Descent are definitely the best label I have worked with. We are honoured to be part of their roster! Labelhead Matt Calvert is brilliant to work with and I haven’t looked elsewhere since singing with DD!

To me it’s both (but my band members will disagree with me whole heartedly here). In one way it’s the end all of metal these days…to get signed, get released, play gigs. On the other hand, I find that the best performance of a song – the way it was intended – is right there on wax, at anyone’s disposal at any given time. Incidentally, I used to be a concert promoter, and booked bands from Japan, Australia, US, and Europe to play in London over a ten-year period. My shows were mainly sold out in advance because I went for bands that there was demand for in the underground. So I suppose my answer is – yes there’s a point to playing live if there is demand. But unless you have your entire life to dedicate to touring, it’s a fool’s errand. The pond is too big.

What are the next steps for Craven Idol?

Well, we’ve got a few gigs lined up to support the release in London and Glasgow, but beyond that we’re just going to keep writing new material. We are also releasing our 2010 EP Ethereal Altars on tape with some bonus covers of Poison and Onslaught to go!

Thanks for the interview! Stand tall against the raging tides!