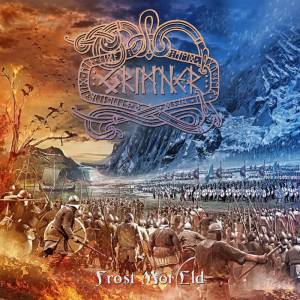 Grimner are a Swedish Viking/Folk Metal band and this is their second album.

Grimner play upbeat and melodic Metal that uses folk instruments such as flutes, mandola and Swedish bagpipes, as well as keyboards to add a rich layer of feeling and atmosphere to their aggressive Metal.

For an easy and lazy stylistic reference, think Amon Amarth crossed with Korpiklaani; this should give you a basic idea of what Grimner do.

Vocally, harsh shouted screams are used in the main, with these being added to by well-performed cleans that usually end up sounding quite epic and stirring.

There’s a European-styled melodic Metal base to the music that is simply built upon by the band to use as a staging ground for their folk and Viking influences.

The songs have high energy levels and sound quite danceable – I imagine this kind of thing would go down a storm live.